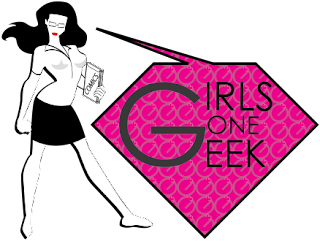 Though I love to write, it took me a long time to warm to the idea of blogging. I'm no new media hater, but my training as a newspaper journalist made me hesitant to embrace a semi-anonymous, proudly self-focused medium. More than anything, I was terrified that I'd be bad at it or that I'd have nothing interesting/amusing to say. I'm glad I didn't let that stop me from starting this blog in 2008.

I Don't Read My Blog Either has been creatively satisfying and, at times, incredibly therapeutic. It also led to some real-life socializing with very cool people. Best of all, I discovered that I really enjoy writing about comic books and my experiences as an atypical geek. So does my friend V., and our shared fangirl enthusiasm led us to create Girls Gone Geek a few months ago. We're enjoying the hell out of it, but since I also have a full-time job and a family, something had to give. Unfortunately, this blog began to suffer from infrequent posting, then outright neglect. I've been in denial, but now seemed as good a time as any to admit that, for now, IDRMBE is retiring. I wish I were one of those people who could maintain five blogs, a regular podcast and a healthy work-life balance on fewer than six hours of sleep a night — but I'm not. Besides, I figure it's only a matter of time before my children can barely stand to be in the same room with me and their dad, so I ought to milk that whole "being present" thing while they still think we're kinda cool.

To everyone who stopped by and/or commented, I offer my sincere thanks. There's a whole lot of everything floating around, so I'm honored that you found my little corner of the Web worthy of your time. If you have even a passing interest in comic books, I hope you'll drop by Girls Gone Geek and say hi or visit our Facebook page.

Gotta run, as it's already past my bedtime. I really wasn't kidding about that sleep thing! 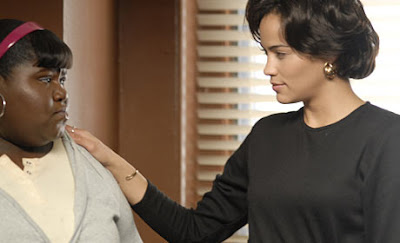 I'm not going to see "Precious."

Back in the '90s, I knew several people who had read (or attempted to read) "Push," the novel "Precious" is based on. To be fair, I'm one of those people who can't stomach stories, real or imagined, about child abuse. Reviews and word of mouth convinced me that I was the wrong audience for a story about a morbidly obese girl who is repeatedly raped by her father, impregnated with his children, and subjected to depraved acts at her mother's hand. It's not that I didn't know those things happened (I was a newspaper reporter, after all), but I had zero desire to be immersed in that world in my down time.

The Washington Post's Courtland Milloy said it better than I can, but I just don't see the value in watching this hellish story play out on the big screen. I'm all for tackling hard truths through art, but I have a hard time believing that "Precious" will do anything to make a difference in the lives of real-life abuse victims. Plus, there's something deeply grating about the idea of a privileged film festival audience seeing this movie and gasping, "How powerful! I had no idea this world of ghetto tragedy existed!"

There's a valid argument that "Precious" represents a thoughtful alternative to movies about African-American men dressed in drag and adaptations of ham-fisted stage plays. (Irony! Tyler Perry is one of the big names promoting "Precious.") But are those my only choices if I want to see a movie with more than two black people in it?

The Goat's Mustache is Cameron Diaz

I really want to meet the person responsible for casting "Community," because he or she is a genius. It's no surprise that Joel McHale and Chevy Chase are funny, but Danny Pudi is a real find as the intense, unfiltered Abed, who appears to have Aspergers. As sketchy as that sounds, there's nothing pitiful or mean about the way Abed's quirks play out on "Community" — especially since most of the characters are odd ducks. I definitely see shades of my son J. in Abed, and it's great to see that represented in a genuinely funny way.

For the record, J. gets a kick out of Abed's shenanigans, and the above clip is one of our favorites. Major props to my friend V. for turning me on to this show.
Posted by E. Peterman at 6:24 PM No comments: 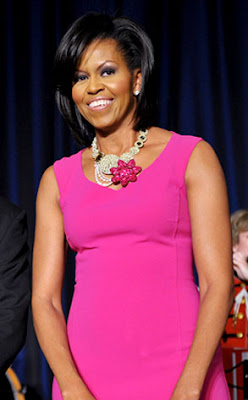 Well, this is pretty doggone cool. The folks behind Mrs. O, the lovely blog devoted to Michelle Obama's style, have written a book, "Mrs. O: The Face of Fashion Democracy" — and yours truly is quoted in it! I've written hundreds of articles, editorials and essays over the years, but this may excite my mom more than anything I've ever done.

A while back, Mrs. O readers were invited to offer their thoughts on what makes the first lady a style icon. I wish I could remember exactly what I wrote, but it was something about how she helped make fashion seem more accessible. I understand the fantasy aspect of clothing design, but a lot of the stuff coming down the runway has nothing to do with the average American woman's needs. OK, Michelle Obama isn't exactly average, but her clothes are both stylish and grounded in reality. She has her pick of designers, but she also wears clothes from J. Crew, Target and White House/Black Market.

This is probably as close as I'll ever get to Michelle Obama (or Michael Kors, included in a full Q&A), but I'm stoked. Thanks, authors!
Posted by E. Peterman at 8:28 AM 2 comments: 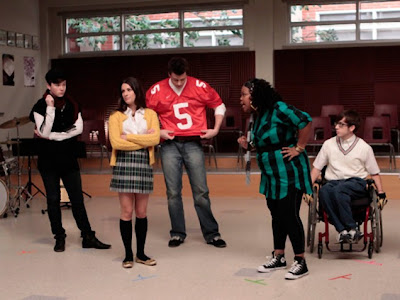 I love "Glee" so much that I'm already worried about the moment, perhaps inevitable, when it starts to make me crazy. I saw it happen to my friends who got sucked in to "Lost" and "Heroes," and the depth of their disappointment when those shows went off the rails ... well, it was troubling.

So far, the musical bits have been fabulous and the casting is spot on. I don't know how much Fox is paying Jane Lynch to portray cheerleading coach Sue Sylvester, but it's probably not enough. The woman is a master of the withering one-liner ("I’ve always thought the desire to procreate showed deep, personal weakness."), and her character is terrifying. Then there is Kurt, glorious Kurt, who cracks me up with the mere arch of an eyebrow. I thought the episode where he came out to his flannel-wearing dad was expertly handled. After Kurt stammered that he was gay, his dad shrugged and said, "I know." That he wasn't thrilled about it but still openly loved his kid seemed realistic — and it was touching.

In fact, that particular episode illustrated what makes "Glee" work so well: its successful combination of absurdity (the football team dancing to "Single Ladies") and poignancy (quarterback Finn's terror of being stuck in his hometown forever because of his girlfriend's pregnancy). And don't even get me started on how effing fabulous Kristin Chenowith was a few weeks ago as a drunken, former glee club star. The show's high goofball factor helps it get away with stereotypes that would otherwise be annoying.

But I'm not completely blinded by devotion. No show is perfect, but sometimes I worry that the things I don't like about "Glee" will start to overwhelm the rest. Like the constant focus on Rachel and Finn's mutual infatuation. I really like Rachel's character, particularly her awareness that her ruthless ambition alienates people. Finn's hunky/dim schtick is adorable. But what initially hooked me was the motley crew of glee club members, and the assumption that they'd all get a chance to shine. I want to know more about Tina, the Asian girl who auditioned with a ridiculously aggressive rendition of "I Kissed a Girl." But she's barely spoken since the pilot. Will Mercedes, the club's budding Aretha, be given more to do than make sassy remarks about her friends' shenanigans? I love the fact that Artie's wheelchair is regularly worked into song-and-dance routines. And the boy is funny. What's his story?

I realize the show hasn't been on that long, and maybe the "Glee" writers are getting to all that. For all I know, Artie and Tina may become an item. But I've been watching television too long to expect the unexpected, even from a really good show. Now that the show has caught on and grabbed the attention of people like Madonna, I fear a parade of Rihanna-esque cameos and repetition of themes that are already starting to wear out their welcome. 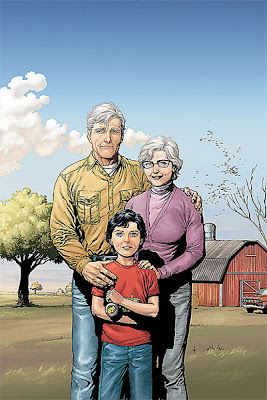 Does Geoff Johns sleep? From where I'm sitting, it looks like he's writing roughly 70 percent of the books DC is putting out right now, including event stories like "Blackest Night." He's like the Joyce Carol Oates of comic book writers.

Johns' work rarely disappoints, but I approached his latest project, "Superman: Secret Origin," with trepidation. The Man of Steel's backstory has been told many times in almost every medium, and it was hard to believe that there was anything new to say. But while I'm not a rabid Superman fan, I am a sucker for how-it-all-began tales and Gary Frank's artwork. I'm glad I put my skepticism aside, because "Secret Origin" No. 1 is winning in its simplicity and obvious affection for all the origin tales that preceded it.

In Johns' version, Clark Kent is a teenager who is freaked out by his burgeoning powers. Like all adolescents, he's stuck in a changing, unpredictable body. The difference is that when he kisses his childhood sweetheart, Lana, the embarrassing, involuntary reaction is scorching heat vision. Ma and Pa Kent realize they can't put off The Talk any longer, and as a parent, I found myself wondering how I'd break the news to my kid that he dropped out of the sky in a rocket ship. Their big reveal goes badly, especially after unexpected holographs of Clark's — uh, Kal-El's — Kryptonian birth parents appear near the rocket they've hidden in the barn. Clark goes nuts with anger and confusion, and Pa Kent's loving reassurance ("You are my son.") is so touching that it made me a little teary.

The art in this book is gorgeous. Frank draws Clark exactly like a young Christopher Reeve, who is the gold standard for Superman. There's one panel where teen Lex Luthor's facial expression is so perfectly furious that I kept flipping back to study it. Even if you knew nothing about who Luthor eventually becomes, it would be chilling.

Rarely has my 9-year-old son so entranced by a comic book. As I watched him read "Secret Origin" for the second time, I was struck by how few of my comics I've been able to share with him. Let's face it; once you leave the kids' section, a great many comic books are filled with imagery inappropriate for children under 13. "Secret Origin" isn't a "kids" comic book, but it is accessible in the best possible way. He's antsy for No. 2, and so am I.
Posted by E. Peterman at 6:33 PM 2 comments:

Video Of The Week


For years, my friend C. and I have been mocking R&B love songs that offer literal, step-by-step previews of the night ahead. Besides being unintentionally hilarious, the songs are often bossy (Don't tell me what color dress to wear!) and ridiculous. All night long? No thanks. I've got an early conference call.

I have C. to thank for unearthing the satirical gem "Ooh girl!," which is the perfect answer to years of goofy sexual braggadoccio in song: "I apologize in advance. I can probably give you seven minutes if you don't move around too much."
Posted by E. Peterman at 6:13 AM 2 comments: